Venture to the southern coastline of Oahu via bus or car and you’ll discover Diamond Head crater, (called “Leahi” or “brow of the tuna” by ancient Hawaiians) which was originally formed over 100,000 years ago. According to local history, in the nineteenth century British sailors, upon first sighting the shimmering calcite crystals in the lava rock, mistook them for diamonds in the sold of the crater. It was declared a National Natural Landmark in 1968, and is currently one of Oahu’s most prestigious landmarks, receiving approximately 800,000 visitors per year.

An Idyllic Respite from City Life

Diamond Head offers a delightful escape from the city, and options for natural entertainment abound. Indulge in a relaxing afternoon of whale watching, stroll or jog along Diamond Head Road, enjoy a leisurely hike inside or around the crater featuring exquisite views of Honolulu and Kahala along the way, or catch a wave at Browns and Kaikoos surf break. If your tastes lean more toward creature comforts, Diamond Head is located just a short distance from Waikiki and Kahala. Magnificent beachfront estates, celebrity retreats, and ocean view homes with beach access dot the coastline. Adjacent Kapiolani Park is a magnificent spread of 300 + acres of tree lined walking paths and grassy fields for soccer, baseball and other sports, plus Honolulu’s outdoor concert hall, the Waikiki Shell. Many cultural festivals take place in the park which also hosts craft fairs, picnics, and the Honolulu Marathon.

Located at the base of Diamond Head at the edge of Waikiki, the “Gold Coast” neighborhood consists of oceanfront condominiums and residential cooperative buildings offering a beach and ocean oriented lifestyle.

* Numbers do not include non-rentals under $100K

Based on 44 single family home

Do you have more questions about this area? 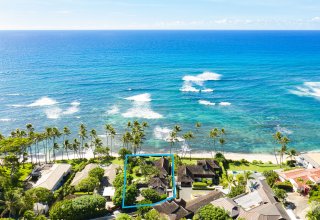 VERY RARELY available on this coveted stretch of beach! Situated on prestigious …